The Wilbraham Police Department K-9 Unit was started in 2007 by a donation from the Wilbraham Mason Lodge. The first K9 member of the Department was a yellow lab named K9 "Ben" and his handler Officer Joseph Brewer. Ben was a single-purpose trailing dog and was used for searching for missing and wanted persons. Ben was retired in late 2008 due to a medical condition. 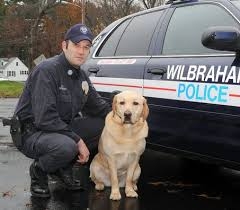 The Department continued the K9 Unit with its second K9, "Charon." Charon is a German Shepherd and was imported from the Czech Republic. He is a dual-purpose Patrol and Narcotic K9. The Patrol aspects of his specialties include tracking, building searches, area searches, article recovery and criminal apprehension. The narcotics that Charon is trained to detect are marijuana, cocaine, heroin, methamphetamine and MDMA (ecstasy). Charon and Officer Brewer are members of the Massachusetts Police Work Dog Association and the North American Police Work Dog Association. They are trained and certified to the North American Police Work Dog Association national standard. They attend a minimum of 16 hours of in-service per month and certify annually.

Officer Brewer and K9 Charon have assisted on many investigations in Wilbraham and surrounding communities. They also assist the Eastern Hampden County Drug Task Force, DEA and the US Postal Inspection Service with drug interdiction efforts. In May of 2012, Officer Brewer and K9 Charon were recognized by the Postal Inspection Service for their drug interdiction efforts.

The K9 Unit is currently assigned to the second shift patrol division and falls under the supervision of Captain Robert Zollo. The Wilbraham K9 Unit expenses are offset by donations and fundraisers for the Wilbraham Police K-9 Unit Gift Fund. Anyone interested in making a donation or hosting a fundraiser may contact Officer Joseph Brewer or Capt. Robert Zollo. If you are interested in a K9 Unit presentation or demonstration, you may also contact either Officer Brewer or Captain Zollo.